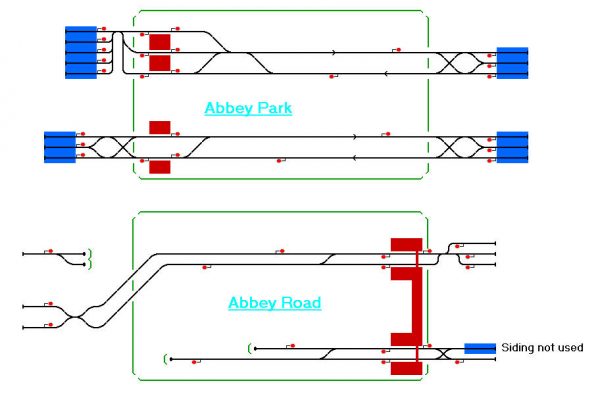 This project simulates a model railway layout (00 gauge) called Abbey Park which is owned by John Polley.
John Polley used to be a London Underground driver before he gave it up for a desk job in network control.
He says: “At least I have my little trains to play with and they are much less trouble.”
It is currently under construction in real life but I provide here a sneaky preview of what it will look like.
This is a replacement layout of a popular, well known London Underground layout called Abbey Road, which
is also provided. The rolling stock is mainly tube stock and dates back since the 1930s. You can also buy
these trains from this website: http://www.metromodels.net/ The fiddle yard (area not in the green box) is
supposed to have 3 way points but as this simulator doesn’t have 3 way points I have had to modify it.
In addition, it was supposed to have a traverser for the 5 sidings on the upper level.

Don’t forget to check out Abbey Road on the Model Railway Channel and on YouTube.