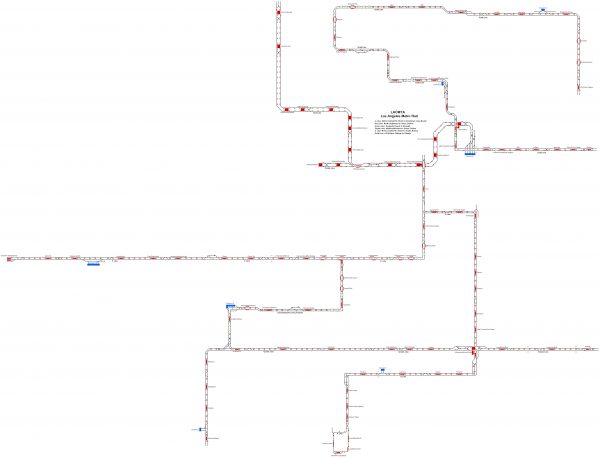 A complete rendition of the Los Angeles subway/tram system, known locally as Metro Rail. All six major lines are included with all stations and all divisions, with a bonus seventh line and yard which are not yet in service IRL but have been included.

This is a semi-advanced simulation, so it is not intended for those who are just getting started with Railway. Even though most of the route has been automated, there are switches and junctions that still need manual setting, which helps make this hard!

The included timetable runs from 6 AM to just past 7 AM, with all of the services that run within this time span. They are based off of real-world LACMTA timetables, though I may have gotten a small fraction of it fictitious. The included session has automatic signal routes set over all crossovers, not only to better identify where services run, but so that you not need to constantly click on the Actions Due window.

Recommended Advice:
It is recommended that you open the Actions Due and Service Information windows, and set Train Information to be on as well, as they will be important in routing services onto the appropriate tracks!

This information is duplicated within the simulation.

The Routes:
A Line:
The A Line or the Blue Line operates from the nearby city of Long Beach north to Metro Center/7th Street in the downtown district. A Line trains pass through downtown Long Beach in a clockwise loop, crossing over from right-hand running to left-hand running at a diamond crossing at Anaheim Street. In downtown Los Angeles, the A Line shares two stations with the E Line before diverging east. Four A Line trains, prefixed ’11’, begin at Division 11 and deadhead south to Downtown Long Beach as non-revenue trains (or empty stock trains in British English). These trains require manual switch setting to avoid derailments! A Line trains in the simulation are prefixed ’01’.

E Line:
The E Line or Expo Line operates from the western suburb of Santa Monica east to Metro Center/7th Street in the downtown district. Unlike all other terminus stations on the system, Downtown Santa Monica has three tracks and two platforms. In the downtown district, the E Line shares two stations with the A Line before diverging south. Five A Line trains, prefixed ’14’, begin at Division 14 and deadhead east to Expo/Bundy as non-revenue trains (or empty stock trains in British English). These trains require manual switch setting to avoid derailments! E Line trains in the simulation are prefixed ’06’.

Gold Line:
The Gold Line operates from Atlantic east of the city into the downtown area before turning northeast towards APU/Citrus College. This line is almost entirely automated, with the only routing needed being done at the termini stations. Gold Line trains in the simulation are prefixed ’04’.

Green Line:
The Green Line operates from Redondo Beach in the west to Norwalk in the east. Unlike the other routes, this one does not serve downtown Los Angeles. This line is also almost entirely automated, with the only routing needed being done, again, at the termini stations. Green Line trains in the simulation are prefixed ’03’.

Purple Line:
The Purple Line operates from Union Station to Wilshire/Western. All but two of it’s stations are shared with the Red Line, diverging from that route at Wilshire/Vermont heading west. One Purple Line train, labeled ‘2001’, begins at Division 20 and heads north to Union Station as a non-revenue train (or empty stock train in British English). Purple Line trains in the simulation are prefixed ’05’.

Red Line:
The Red Line operates from Union Station to North Hollywood. After sharing several stations with the Purple Line, it diverges onto it’s own solo trackage at Wilshire/Vermont heading north. One Red Line train, labeled ‘2002’, begins at Division 20 right behind Purple Line non-revenue train ‘2001’ and heads north to Union Station as a non-revenue train (or empty stock train in British English). Red Line trains in the simulation are prefixed ’02’.

Enjoy and thanks for downloading!