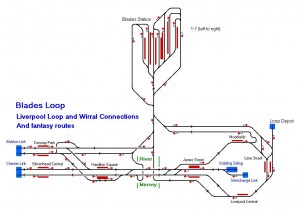 This is my first project on Railways. I thought that I’d experiment with track building on the already built Liverpool Loop. Therefore, the track is fairly familiar but I have added some extra track leading up to a fantasy station, called Blades Station. Therefore there are extra areas of signalling but I have also set directions to make it partially easier.

The extra track also means that the timetable has been changed and now it is fully made up. The base was the heavy traffic timetable and I haven’t changed the original 4 train sets. I have, however, added 6 extra routes that allow trains to go between the Interchange Link and from the all new Loop Depot. Just a warning, there are lots of trains coming from that Depot!  [Note:  two more timetables have been added on 31/05/10 with lower train frequencies]

I am no train buff therefore all of the train descriptions of where they are going are very down to earth, stating the first and last place on the route rather than their final resting place, as with the original trains. My lack of knowledge also means that I don’t know all of the headcode classifications so they are fully made up so if anyone who knows there stuff notices, I’m sorry

If you notice any errors or wish to enlighten me on the headcode issue or anything else, please feel free to contact me via the below comments section.

Coming soon: A more expanded version with more sidings and more stations as well as other real routes