Have you ever wished that the railway puzzle games in your smartphone were made for computers, so the games could be much bigger and more complex?

Well, here it is!

[Note:  make sure you read the instructions in the readme file.  Don’t ignore them like I did or you’ll end up in a LOT of trouble… like I did – Albert]

[Note2: The ROS Team take no responsibility for this submission.  Anyone brave enough to play does so entirely at their own risk.]

This route covers the majority of the lines in Cornwall, running from Bodmin Parkway to Penzance, and including the St. Ives, Falmouth and Newquay branches.

A session file has been included with automatic routes preset across unused junctions. It is recommended no other automatic routes are set, as it will cause issues when trains need to cross them later in the day.

A ReadMe has also been included with some helpful tips for operating! 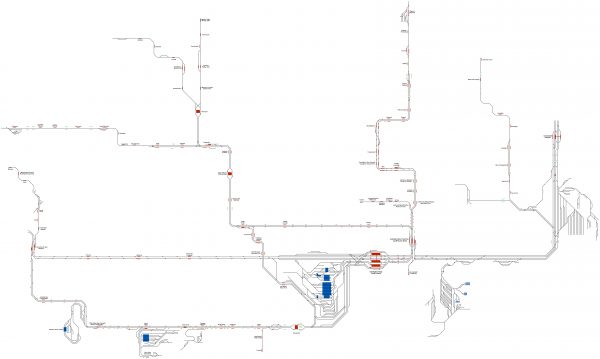 This route covers the busy station of Sheffield, in South Yorkshire. In this simulation you can expect a good amount of through trains at Sheffield, as well as a wide variety of terminating services.

The included timetable starts at 0700 and is based on a normal Friday service. With this timetable, it may be nessecary to double stack terminating services in platforms 3 and 4, just make sure you look at the departure time before you do this.

This project is open on the ROS GitHub (https://github.com/Railway-Op-Sim/UK-SheffieldV2) which means anyone can contribute to the project. You are welcome to contribute towards this route, may that be creating further timetables, or changing aspects of the route.

To aid in timetable creation, a txt file in included with the locations of the entry and exit portals, which you can copy directly into a timetable.

If you require any assistance in creation of a timetable or submitting it through GitHub, then visit the helpdesk channel on the ROS community Discord and we’ll be happy to help.

This is a relatively minor ‘tidy up’ release.  It adds a few features that improve usability and operation, and corrects a couple of bugs.

When a train changes direction under timetable control at a location other than at buffers there is usually a redundant route left in the original direction. The program now removes these unwanted routes automatically up to the next facing signal.

All types of finish event are now permitted immediately after a new train is declared (‘Snt’) apart from Fns-sh & Frh-sh.

Facing signals can now be allowed next to bridges if the user chooses it – this is useful for working on old railways without having to change them or for new densely packed railways. A warning is given that such signals can’t be used as route truncate points, but it is now up to the user to decide whether or not that risk matters.

The distance/speed selection warning that all track lengths will be set to the specified value is now only given once.

A few timetable error messages have been clarified.

For distance/speed setting the selected track length should show in magenta for easy identification, but prior to this release it was overridden by the normal colour when set.

Track information showed when the mouse was positioned over the timetable editor, this has now been corrected.