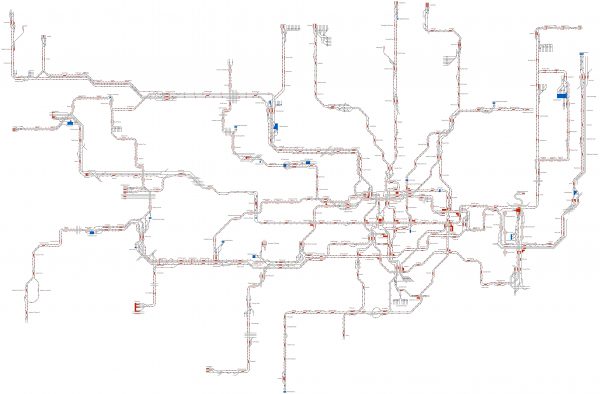 This is a representation of the London Underground network as it was in 2019. Included in great detail are all 11 lines. This route should be considered an advanced simulation due to the high level of traffic and scale of the network, it is a challenge that is supposed to be fun (after all no single person operates the whole network conventionally!).

The included timetable represents services between 6:30-7:30am on a Sunday. Note that the Waterloo & City line does not operate on Sundays hence the lack of traffic on this line.

It is strongly advised that you use the Action Panel during the simulation in order to have quick and easy access to signalling of trains as and when it is needed. Furthermore, again due to the vast number of services, if you are beginner I also recommend slowing down the simulation or even pausing it whilst determining what you need to do next.

Where appropriate “via” points have been specified in train descriptions, take extra care to ensure you account for these as it can be easy to accidentally route a service into a terminating/wrong platform and then no longer be able to resume.

Services which consist of depot movement/empty stock have been allocated the prefix “XX” for this simulation. Within the contained timetable is also a single engineering train on the Piccadilly Line which has been given the prefix “EN” in the headcode.

London Underground is split between two main route types. The sub-surface lines are the earliest to be built and are rather analogous to the New York subway. Services consist of box-shape rolling stock and the classification comes from the fact that the tunnels lie just below street level. Tube lines however are formed of circular tunnels and lie at much deeper depths, the rolling stock accounts for this being “tubular” in shape (hence the slang name for LU “tube”).

– Metropolitan Line: services have been allocated the headcode prefix “ML”. Metropolitan Line services from from either Baker Street or Aldgate at the city centre to Uxbridge/Watford/Chesham/Amersham in the North West. Pay close attention to the calling points of services as some run non-stop through certain stations.

Note: Metropolitan Line trains DO NOT stop at any stations between Finchley Road and Wembley Park, these stations are Jubilee Line calling points only.

– Circle Line: services have been allocated the prefix “CL”. The line name is largely a misnomer as a few years prior the running of circles in a continuous loop was ceased with trains instead running beyong Edgware Road toward Hammersmith.
Circle Line trains run from Hammersmith to Edgware Road via Baker Street, Tower Hill, Victoria and High Street Kensington (or vice versa).

– District Line: services have been allocated the prefix “DL”. Perhaps the most complicated of the London Underground lines is the District Line with it’s large number of possible destinations. Services run between Upminster in the North East of London to Wimbledon/Ealing Broadway/Richmond and Edgware Road to Kensington (Olympia). Again pay close attention to the calling points of these services!

– Hammersmith & City Line: services have been allocated the prefix “HC”. Trains run from Barking in the North East of London to Hammersmith via Farringdon and Edgware Road.

– Northern Line: services have been allocated the prefix “NL”. The Northern Line (similar to the District Line) covers more than one destination. Trains run from either High Barnet or Edgware to Morden. Within the city between Euston and Kennington there are two branches, take note of whether a service is going via Charing Cross or Bank when routing trains from Camden Town (services via Charing X call at Mornington Crescent whereas services via Bank do not) southbound and Kennington northbound. At Finchley Central there is the occasional service towards Mill Hill East along the single line branch, be sure to route trains into a valid platform for this route.

– Central Line: services have been allocated the prefix “CN”. The Central Line runs from either Ealing Broadway or West Ruislip towards the North East. Beyond Leytonstone trains either continue onward towards Epping or head towards Hainault. An occasional service runs along the top of the north-east loop from Hainault to Woodford via Roding Valley.

– Piccadilly Line: services have been allocated the prefix “PL”. The Piccadilly Line runs from Cockfosters north of London towards either Rayners Lane (and occasionally onward towards Uxbridge), Heathrow Terminal 5 or Heathrow Terminal 4. Nore that at Heathrow services pass through the loop counter-clockwise between Terminal 4 and Terminals 1, 2 & 3. Piccadilly Line trains run non-stop between Hammersmith and Acton Town (unless specified to call at additional stations). make sure to route trains correctly at Finsbury Park. Included is the now disused but still present branch to Aldwych in central London.

– Victoria Line: services have been allocated the prefix “VC”. The Victoria Line runs from Walthamstow Central in the North East to Brixton in the south. Be sure to correctly route trains at Finsbury Park.

– Jubilee Line: services have been allocated the prefix “JL”. The Jubilee Line runs from Stanmore north of London to Stratford in the North East. All services call at stations between Finchley Road and Wembley Park. Included is the disused section where the line originally terminated at Charing Cross. Make sure to correctly route services at Baker Street.

– Bakerloo Line: services have been allocated the prefix “BL”. The Bakerloo Line runs from either Harrow & Wealdstone or Queen’s Park in the north towards Elephant & Castle in the south. Between Harrow & Wealdstone and Queen’s Park tracks are shared with London Overground services, within the timetable these are the only services to start with a number as opposed to one of the prefixes. Make sure to correctly route services at Baker Street.

– Waterloo & City Line: No services on Sunday. The shortest line on the network, the W&C was originally run by British Rail (and then Network SouthEast) until being handed over to LU. Trains connect the financial district at Bank with the southern mainline terminus at Waterloo.

– All Depots either in full or as off-map places