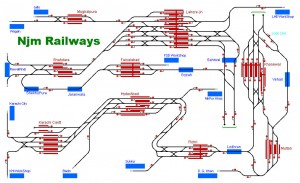 This presents some of Pakistan’s main railway routes.  Although the railway fits into a single screen a substantial amount of detail is included.

Three timetables are provided, and it is suggested that the light traffic version be used first until familiarity is gained.  Considerable forethought is required in routing trains correctly.  The heavy traffic timetable is particularly busy and a real challenge, but to show that it is possible with only minor delays NajamUddin has included a performance file covering the first 15 minutes of operation.

NajamUddin can be contacted at najamalam@gmail.com or via the comments section below.