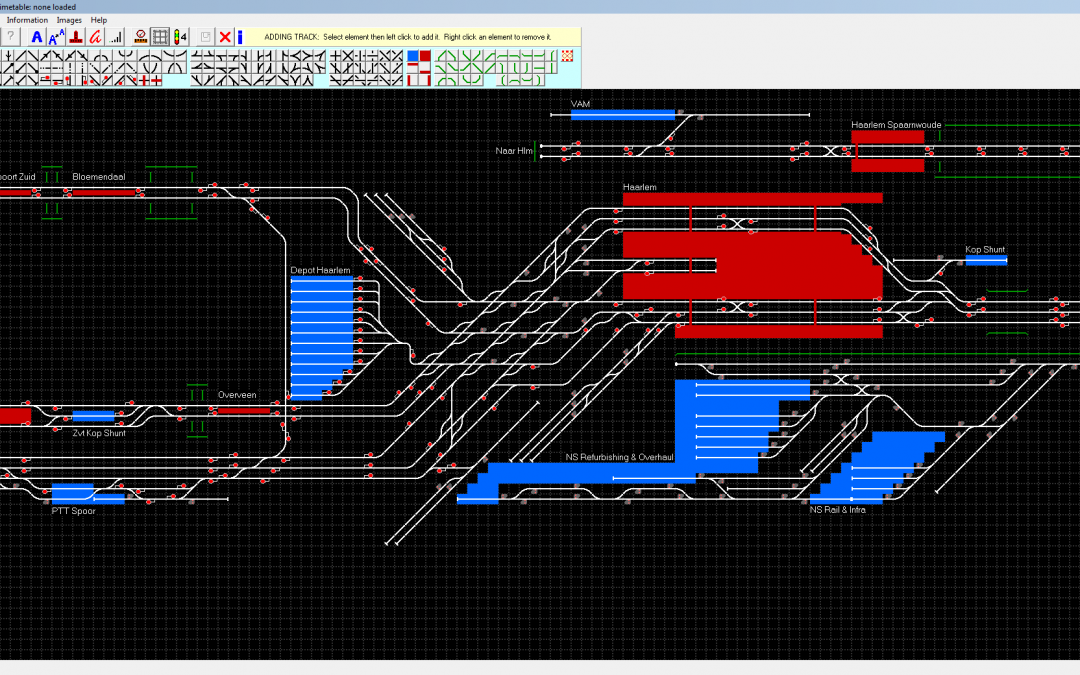 This version includes a number of functional changes as well as several ‘corrections’ (i.e. improved undesirable behaviour) and bug fixes.

A selected area can now be filled with a specified track element, which can save a great deal of time when building long sections of horizontal or vertical parallel tracks.  This was in response to a request from Wilsteady.  The user manual and on-screen help have been expanded to explain this feature in section 3.5.

Level crossings can now be opened and closed manually by left clicking them.  This was in response to a request from Krizar.  The user manual and on-screen help explain how to use this new feature in section 3.1.1.  Note that program versions earlier than v2.6.0 won’t load a session file that includes any manually opened level crossings.

When railways, timetables or session files are in folders other than the defaults, and a user navigates to them for loading or saving, the new folder locations are stored in a configuration file (Config.txt) and are used thereafter by the program.  This is helpful for users who prefer to locate their files in other than the default folders and is in response to an initial request from Micke (Commuterpop) and subsequent suggestions from Bjorn and Krizar as to how it might be done.  The feature is described in the user manual and on-screen help in sections 2.3 and 6.3.  Config.txt also now stores the background colour and signal handedness, making the earlier files that were used for these purposes redundant.

Horizontal & vertical signals can now be used in named non-station (blue) locations.  Wilsteady suggested this a few months ago.  I think I was just playing safe in disallowing them but on further thought I can’t see why there should be problems and testing didn’t reveal any, and it makes them consistent with station locations where signals can already be used.

If a timetabled location appeared twice or more  in a particular service other than with a change of direction between them it was assumed to be an error and not permitted.  It isn’t necessarily an error however for trains that take a circular route back to earlier locations.  This was queried by Daniel Gill some time ago and I promised to look at it again.  This version now allows location duplication but gives a one-off message to allow the user to check whether it’s intended or an error.

If a railway or session contains user graphics and the program can’t find them, then formerly the load would fail.  Now they are loaded without them but a message is given to inform the user.

In the last update a train that changed direction at a timetabled location had any excess route elements beyond the train removed automatically up to the next signal.  This has now been extended to trains under signaller control that change direction.

A route that finished at a trailing point leg where an existing route on the other leg looped back to this trailing leg caused an appending route to loop forever.  A new test has been added that checks and exits for this condition.  Thanks to Xeon for spotting this and notifying me by email on 13/10/20.