IMPORTANT NOTE:  During development this railway revealed a program error relating to maximum train speeds.  To run properly it requires program version v1.3.1 or later – click here to download it. 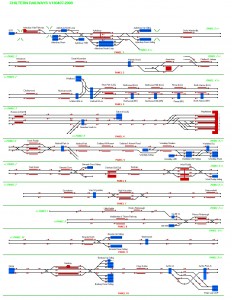 Here is the updated version v2.00 of Chiltern Railways.  It incorporates several important changes to the route (for the purpose of realism and ease of operation) as well as corrections to some of the faults found in v1.00 Timetable.

All the changes are explained in the notes PDF included in the zip file attached.  But FYI the key changes are:-

I have not included a session file.   Instead I prefer the use of the Preset Automatic Signal Routes button once the railway and timetable are loaded.  Instructions are in the notes file within the attached ZIP file.