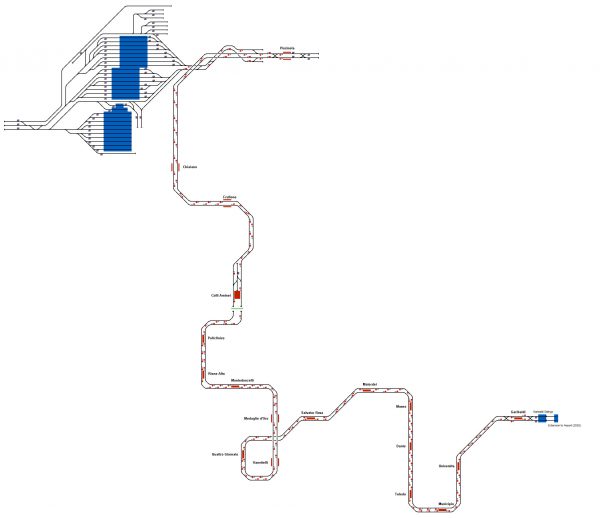 This is a representation of the Line 1 metro which operates within the Italian city of Naples. Included within the simulation is a timetable depicting a typical service during a weekday commencing at 10am. Due to the online resources for the Metro system simply stating a 10′ interval service I have had to improvise a bit using transport planners to estimate the times.

Line 1 is 18km in length connecting 18 stations between the north of the city in the the district of Piscinola, and its centre at Piazza Garibaldi, with a view to further expanding to form a loop consisting of 26 stations via the airport by 2024. The line is operated by Azienda Napoletana MobilitÃ  SpA (ANM) and was opened in 1993. An additional station, Duomo, between UniversitÃ  and Garibaldi is set to open in 2020.

Included within the route are all stations as of 2019 with a view to possible expansion after the in-progress expansion of the real L1 has concluded towards Napoli Airport.

Further to this Piscinola depot is also included.

The included session consists of a simple timetable with shuttle services heading between Piscinola and Garibaldi, as such no advanced experience with ROS is required to operate the railway. Areas to monitor are the terminii and access to the siding at Colli Aminei.