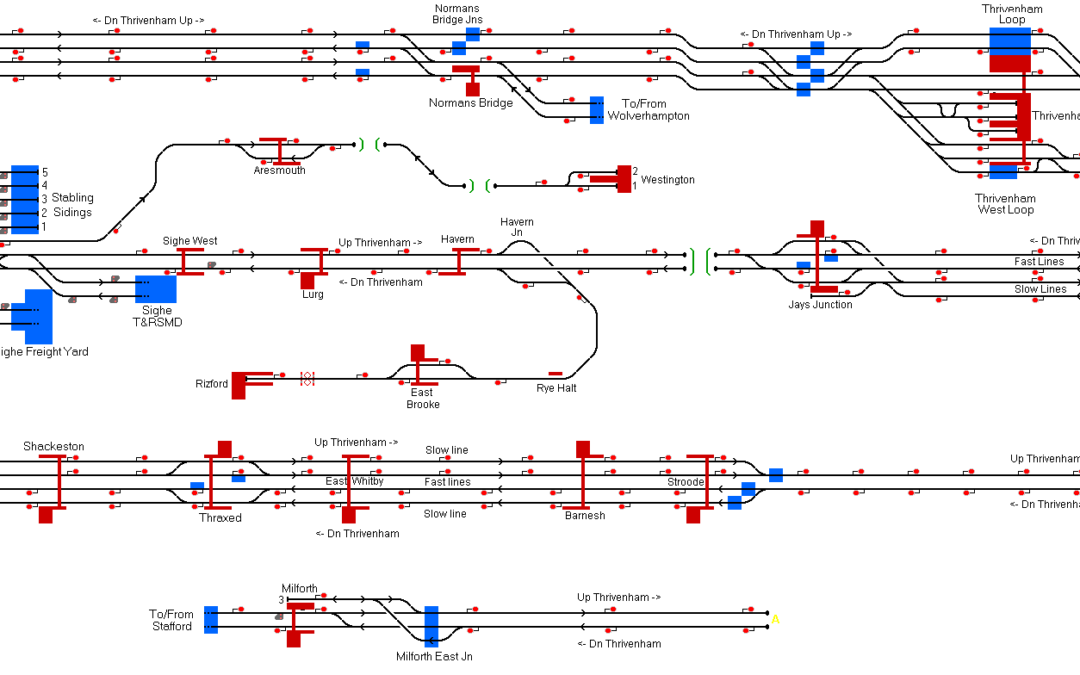 This an expansion of my original Sighe simulation, uploaded, I think back in 2011. The railway has been extended at either end and compacted to give the feel of a signal box which deals with the traffic in a fictional location somewhere in the central-midlands, between Coventry, Birmingham International and Stafford. The area is busy, as it was designed to be an off-shoot of the Trent Valley line, but which also somehow connects to Wolverhampton.

As for the railway itself all rail, preferred directions, distances, speed limits and signalling are included.

As for the timetable, it runs from 0600 to 1200, with a few overruns which last to 1207. All last services terminate at the most reasonable locations possible without trains just stopping in the middle of no where. The timetable has been designed in such a way that you should be able to complete it with a minimum of 90% score, but it does take a lot of concentration and it is possible!

Also, this is the easy version of the timetable, a harder version will be uploaded in due course.

Lots of light loco moves have been incorporated for those of you not interested in looking for bugs and just want to cause mayhem. Light loco’s with “LZ” in their description must not be used for rescues as they are en-route to collect their train locally, within the signal box’s area, however you play your game how you want!

Why is it listed as BETA? This has had a lot of work put into it but I am only human, I miss things. The timetable has had about 50 hours of testing an debugging put into it, aside from approximately 150 hours in building. So everything *should* work fine. However I would like for as many people as possible to look for anything which could be seen as an error. Should you find anything amiss, either with the railway or the timetable, feel free to get in touch, contact details below.

One tip I will give is…. READ. THE. TIMETABLE. of any train before routing it. Albert has lost quite a few hairs from not doing so!

Aside from that, have fun!